When is the best time to fly to Oregon?

₹ 129,060
₹ 108,680
₹ 88,300
₹ 67,926
Whilst there are several times of the year to choose from, January is seen as the time to fly to Oregon, however, it is possible to get good deals throughout the year. July sees the temperatures in Oregon peak to their warmest. December tends, on average, to see the most amount of rainfall.

When is the best time to book flights to Oregon?

The price you pay for your flight to Oregon may vary depending on when you book. For the best chance of a lower fare, look to book 60 days in advance of your trip. Fares are likely to increase a fortnight or so before your departure date.

Which day is cheapest to fly to Oregon?

Monday is currently, on average, the cheapest day to fly to Oregon. Flying on Sunday will result in higher flight prices.

Flights at midday are typically the cheapest time of the day to fly to Oregon. Flights in the morning are usually the most expensive.

Sip a little wine under one of the covered bridges, or dine outside among the rugged mountain tops and long beaches. Behind you are lush fields of green and sagebrush swaying in the wind. You’d never guess you were in Oregon.

Once a promised land to the pioneers, today’s Oregon is the epitome of the American lifestyle. Visitors booking flights to Oregon will experience a little bit of everything from every region in the US. Covered bridges and steepled churches are quaint among the backdrop of rolling mountains, volcanoes and lava fields. Take a walk where the cowboys and Indians fought along the coastline and walk through the wheat fields and berry gardens that help boost Oregon’s economy. Travellers with an appreciation for wine will book flights to Oregon for a visit to some of the nation’s best vineyards. Take a step away from the serenity of Oregon’s coast and head to the city for an urban escape. Whatever the reason for visiting Oregon, it’s sure to be memorable.

Oregon is split into two climate zones by the north-south Cascade Mountains. In general, west of the Cascades gets fairly heavy rain and moderate temperatures. East of the Cascades, the high desert can have very cold winters with considerable snowfall in the upper elevations. Summer days are very hot and the nights cool. Annual rainfall ranges from less than 20cm (8 inches) in the plateau regions to 508cm (200 inches) in the upper western Coast Range. The highest elevations of the Cascades receive 762-1,400cm (300 to 550 inches) of snow annually.

When to fly to Oregon

Peak Season:
The peak season for Oregon flights is May through October, and the height of the season is July. Portland and Ashland are booked solid in summer, and many wineries are open daily during the summer months.

The abundant winter snow brings downhill and cross-country skiers, snowboarders, and snowshoers to the mountains. Mount Hood is crowded summer and winter, and the Timberline snow lasts into summer.

Off Season:
Spring and autumn generally have good weather, fewer crowds, and lower prices. Late March through April is the peak fishing season.

Many vineyards begin wine tasting in November, but most are closed in January and February.

Between October and May, hotel rates are lower, but you need good rain gear. 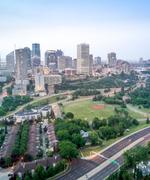