When is the best time to fly to Redmond?

The city of Redmond is set in the high desert of Oregon’s Cascade Mountain Range.  From November to February the mountain views of the snow laden Willamette evergreen forest are especially scenic and many people come to Redmond for skiing and snowshoeing.  Redmond residents are quite fond of the Christmas season; decorating the city centre for the holidays and hosting the magical Starlight Parade which is themed on Dr. Seuss’s Whoville after dark.  The Holiday Village Market is set up in Centennial Square. Artists, artisans and crafters sell their creations from quaint booths fashioned to look like Santa’s workshop.   From late June to the end of August, Redmond hotels tend to book up with families who drive through the city while exploring the region during the school break.  Hotel deals and cheaper flights can be found by travelling to Redmond just before or after this time, in May or September.  Fortunately, these are also the months of Redmond’s most favourable weather.

When is the best time to book flights to Redmond?

Booking 60 days in advance of your planned departure date is, on average, the best time to get cheap flights to Redmond. The general trend is that the closer you book to the departure date, the more expensive your flight will be.

Which day is cheapest to fly to Redmond?

The cheapest flights to Redmond are usually found when departing on a Wednesday. The departure day with the highest cost at present is Saturday.

At the moment, flights at midday are likely to offer the best value for money for your Redmond trip. A flight in the afternoon will more often than not be of higher cost.

Redmond is the perfect home base for nature lovers wishing to explore the Pacific Northwest.  Fishing, boating and hiking are popular year-round sports.  Cline Falls State Scenic Viewpoint Park is 9 acres covering a wide range of landscapes from desert to Ponderosa pine forest.  Birdwatchers flock to the park for its wide variety of songbirds, golden eagles and falcons.   Redmond is also considered the birthplace of rock climbing and Smith Rock State Park is a world class destination for climbers who are attracted to its sheer basalt cliffs.  The park also has many miles of scenic hiking trails.

The Redmond Caves are a popular destination for spelunking, the sport of exploring extensive underground systems.  The caves are part of a network of lava tubes that were formed over 80,000 years ago.  If crawling around in underground caves and climbing up rocky cliffs seems like a little too much effort, then check out Redmond’s first class golf courses, go on a taste tour of the local microbreweries or on vineyard tours with wine tasting.  The streets of Redmond also act as an outdoor art gallery, displaying the “Art Around the Clock” exhibition where public art is borrowed from all over North America.

Car rental is the best way to get around Redmond and visit the outlying parks and attractions.  Redmond has a limited public transit system within the city.

Flights to Redmond arrive at Robert’s Field (RMD), a municipal airport located within the city limits and only two miles (3 km) from the city centre. Several national car rental agencies provide vehicles at the airport but it’s best to phone ahead or check online to arrange a reservation.   The airport is serviced by many taxi companies that offer flat rates from the airport but be sure to confirm with the driver as additional fees may be added if your destination is outside of the city centre.  Many of the local hotels also provide a free shuttle from the airport. 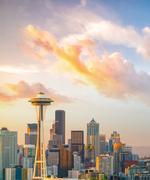