Were you looking for Flights from Chandigarh?
Home Asia India Cheap flights to Chandigarh, India

When is the best time to fly to Chandigarh?

Chandigarh has pleasant weather during the autumn months from August to November when it is not too hot or cold. The comfortable weather makes it the ideal season to visit Chandigarh.

Summer months from April to July are very hot with the maximum temperatures soaring up to 44°C. The hot weather makes it difficult for travel and sightseeing.

The winter months from November to February are relatively mild though it can get quite chill on certain days with the average temperatures remaining at minimum 4°C and maximum 14°C.

When is the best time to book flights to Chandigarh?

Booking 60 days in advance of your planned departure date is, on average, the best time to get cheap flights to Chandigarh. The general trend is that the closer you book to the departure date, the more expensive your flight will be.

Which day is cheapest to fly to Chandigarh?

The cheapest day to fly to Chandigarh is usually Monday. At the moment, Friday is the most expensive.

Chandigarh flights can be made cheaper if you choose a flight in the evening. Booking a flight at midday will likely mean higher prices.

The city of Chandigarh in northern India is a union territory and the capital of the two northern states of Punjab and Haryana. Chandigarh is the first planned city of post-independence India and is known worldwide for its urban design and architecture. Conceived by Le Corbusier, the Swiss architect who wanted to build a people-oriented city with civic buildings, grand boulevards, gardens and lakes. The city plan comprises of 47 sectors that are linked by a network of busy highways.  While each sector is self-contained, certain sectors are more frequented by travellers. Museum enthusiasts would prefer Sector 10 to visit the Government Museum and Art Gallery. Visitors can find a variety of shops and restaurants in Sector 17 while many hotels are located in Sector 22. As the cleanest and well-planned city of India, it has also emerged as a crucial tourist hub. The various attractions include the two theme gardens that are of international repute. Rock Garden in sector 1 has been designed by Nek Chand Saini and includes a grand artwork of sculptures made out of various types of discarded materials. While in sector 16 is the largest rose garden in Asia- Zakir Hussain Rose Garden that spreads over an area of 30 acres covered with an eye-popping 1600 species of roses. Another picturesque spot is the beautiful man-made Sukhna Lake surrounded by the magnificent Shivalik range and lush greenery. Apart from being a major picnic spot for families, it is also the venue for water-sport activities such as rowing, yachting, boating and water-skiing.

Hop on hop off coach is a very popular mode of local transport for the tourists. The double decker coach has an open top roof and follows a circular route to cover the major tourist attractions in the city. Regular bus services are an integral part of the local transportation, provided by Chandigarh Transport Undertaking.

The domestic airport, which is well connected with the National Capital of New Delhi and other important cities, is at a distance of 6.8 miles (11km) from the downtown area.  The airport has a good Tourist Information Centre.  Taxis are easily available for transfer from the airport to the city and various tourist destinations. Taxi services include Radio taxi, Mega Cabs and Radio auto rickshaw. They operate on fixed rates per kilometre. Car rental services with chauffeur or self-driven are also available from the airport. 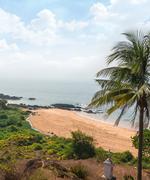